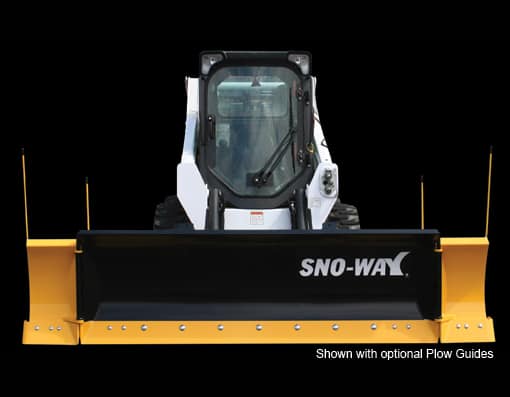 The Revolution™ plow is designed with hydraulically operated wings, allowing the plow to move from a box plow, to a straight blade, to a straight blade with extensions all from the comfort of your skid steer cab.  From the very beginning, the concept was to move a lot of snow while allowing the operator to easily change from one plow configuration to another.

Have You Ever Windrowed with a Box Plow?

While windrowing using the straight blade configuration, you can watch the snow roll as it follows the curved blade cupping the snow forward like you would normally see in a conventional straight blade.  You can use the box plow configuration to move over 6 cu. ft. of snow.  You can configure the wings for any angle allowing you to handle any snow removal job in the best way.

One of the best features of this plow is the full load trip, allowing the plow some give.  So, when you are running at full steam while clearing a parking lot from snow and you hit a large object you did not expect, the plow gives a little and bounces back instead of damaging the plow, skid steer, or the skid steer operator.  In addition to the trip system, the plow also has angle cylinder crossover relief valves to protect your hydraulics if you strike an object.

Watch the Revolution™ Skid Steer Plow Clean in One Pass

This skid steer box plow also has a floating frame and Ground Hugger™ design so that the plow stays on the ground and follows the contour of the plowing surface giving you a clean surface on the first pass.

As you would expect with our skid steer plows, they work with a universal attachment plate and are plug-and-play.  You use the current hydraulic connections already on your skid steer to operate the plow.  The plow is durable with high strength steel, automotive e-coat primer, and military grade powder coat finish.

Make sure your skid steer is ready for winter with the best, most versatile skid steer plow on the market, the Sno-Way Skid Steer Revolution™ plow.