A REVOLUTION IN SNOW PLOW POWER AND VERSATILITY! 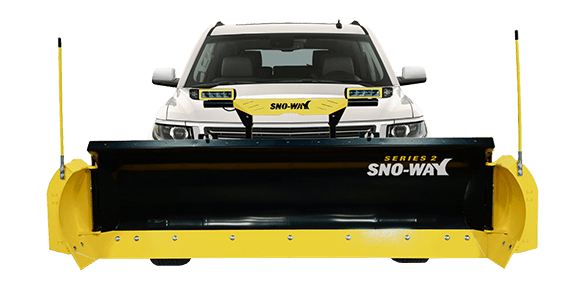 We have started a revolution in power and versatility for the snow plow industry!

We designed the Revolution series to be something more than the other expandable commercial snow plows on the market. We wanted to give our customers the ability to modify the width of their plow without compromising the strength of the plow. Our V-Plow Series 2 snow plow line had shown the industry what happens when you marry versatility to strength and dependability. So why not add versatility to versatility?

The Revolution Series allows you to have the most control with the most options. The triple-axis design allows you to turn the system into a box plow, a scoop plow, expandable-wing, or a straight blade plow. Need to cut in on one side and pull the snow away from vehicles or sidewalks? Just pull one wing in at an angle and leave the other straight. With a pivot of the entire blade, you are now able to pull the snow away. Do you have a drive-through or a narrow exit? You are able to pull both wings in and angle it if necessary. But along with the versatility of this plows comes power too! More about that in a minute.

Designing The Best On The Market

The first thing we did was to use our two most popular commercial straight-blade snow plows, the 26R Series 2 and 29HD Series 2 models. These blades provided us with a good width for most applications, along with a good height for pushing the optimal amount of snow. We kept our patented Ground Hugger blade design, which ensures optimal roll for the snow to evenly distribute it across the moldboard. The aggressive 65-degree blade geometry transfers the pressure from the snow load to the blade, pushing it downward.

Then our engineers designed the wings. They needed to be wide enough to provide a good addition to the blade for larger applications (large parking lots, wide driveways, etc). They also needed to be strong enough to take the pressure of the snow they will be pushing. We wanted them to be able to function independently of each other to allow for more options for the user. To do that we added a double-hinge or “Double Wing Mechanism”, our patented system that allows the wings of the Revolution Series snow plow to pivot 150-degrees independently of one another. This movement is hydraulically controlled to allow for the maximum amount of control and strength. The wings were also designed to have no gaps that would allow the snow to push through and drop back on the pavement.

Revolution Snow Plows For Every Class Of Truck

We wanted to make this a plow that could be available across the board. Not all trucks are created equal, so why should the plows be? We have provided three different Revolution Series 2 snow plow products depending on the vehicle you own.

The Revolution HD Series 2 is the top of the line at 10-feet wide by 29-inches tall! This beast will allow you to be able to move 6.1 cubic yards of snow at a time, that’s 30% more than our competitors! The ability to expand out to a 10-foot wide straight blade means that you can effectively clear your lots up to 70% faster than with a conventional blade!

So no matter what you have in your fleet, we’ve got you covered!

Do You Want More? What makes these powerful snow plows even more impressive is that it comes with our patented Down Pressure snow plow hydraulics system. This system makes our plows 30% more efficient than any of our competitors, giving you a clean scrape on both a front plow and while back-scraping. Down Pressure eliminates the skim layer that all other plows leave behind, reducing the number of passes needed. This saves fuel, reduces the amount of sand or salt needed, and increases your traction.

Studies have shown that the Down Pressure system creates less force on the front axle of your truck. All of this reduces the wear-and-tear on your truck and decreases the possibility of accidents. With this tool at your disposal, you will be able to clear snow far more quickly and efficiently.

In addition to all this, each of these snow plows comes with our ESS LED thermosensitive plow lighting system that connects directly with your vehicle’s lighting system. These lights have normal and bright settings that are controlled with the normal/bright setting on your vehicle. The ESS feature allows you a simple plug-and-play connection to your lighting system with military-grade connectors that keep moisture out of the system.

Don’t Just Take Our Word For It

“I think the best all-around setup I’ve had is a Sno-Way 29R. It’s just a really versatile plow. It’s small enough that you can use it just about anywhere. You can mount it on a 3/4-ton truck. Those are still relatively small. You can maneuver them. It’s quick, it’s durable, I don’t have to worry about breaking it in the middle of a snowstorm.

Don’t just take our word for it! Dan Brunner from Extra Mile Landscaping in West Bend, Wisconsin tells us that the Sno-Way Revolution 29R Series 2 is his favorite plow, hands-down. Dan works for a contractor that specializes in snow removal for many clients with a wide variety of configurations.

For him the best plow for all of those jobs is the 29R: “I think the best all-around setup I’ve had is a Sno-Way 29R. It’s just a really versatile plow. It’s small enough that you can use it just about anywhere. You can mount it on a 3/4-ton truck. Those are still relatively small. You can maneuver them. It’s quick, it’s durable, I don’t have to worry about breaking it in the middle of a snowstorm.”

While the versatility of the 29R is impressive, he is also impressed with its design for ease of maintenance and repair. “I like the way they are designed. They are relatively easy to work on, relatively easy to troubleshoot. Being a mechanic, that’s something that is important to me.” He admits, though, that he doesn’t need to spend much time with repairs. “They’re pretty tough. Sno-Way did a good job at designing the wing and the main blade to prevent permanent twisting and deforming.”

We aren’t done by just designing an impressive beast of a plow! Sno-Way is committed to innovation in every place where we see there is an opportunity for improvement. Here are some awesome machine options that will help you be even more productive. Our patented Wireless Pro Control 2 Plus offers the ultimate in-cab flexibility, allowing you full control of your Revolution Series plow without the need to run wiring into the cabin.  This is a great option to help you avoid drilling into your engine’s firewall and helps you to be able to stow it in the glovebox when you are using it!

Our E-Z Fit Snow Deflector design includes enhanced curvature for optimum snow-rolling and deflection. With superior impact resistance and made with a super-slick material, it is a must-have that is easy to mount.  The best part is that the plow already has pre-drilled holes for the installation!

So What Are You Waiting For?

Do you want to know more about the most powerful and most versatile snow plow in our product line? Check out our closest dealer by clicking HERE. They will be able to answer any questions for you!  The snow season will be here before you know it, so get the best plow on the market TODAY!